My female grandis Isabela has a tank of her own. Until last week there were two big goldfish in her tank, always chasing each other. They had been there for a year.
When I came home last week one goldfish was floating dead in the water, without any injuries. And the other goldfish had disappeared. I've emptied and cleaned the whole tank, but I found no trace of it.

Isabela is the only suspect. However: in 17 years she has never eaten fish, let alone a living fish.
The only scenario I can think of is this:
One goldfish died. The other goldfish, having lost its friend, started chasing Isabela. Isabela got annoyed. She killed the goldfish, and ate it.

I wish I had seen it!
I don't feel bad about losing the goldfish. They were originally intended as feeder fish (for a RES that didn't eat them). I'm just wondering what happened.
And Isabela looks innocent like always. 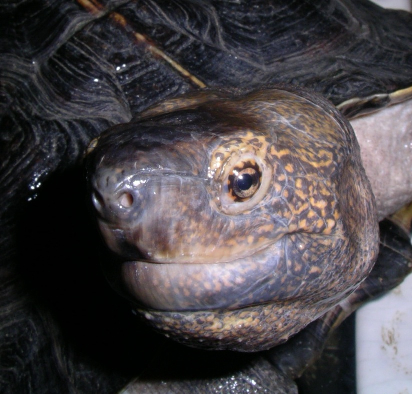 That's an interesting story, indeed.
You'd wish you could ask the turtle what happened, aye?